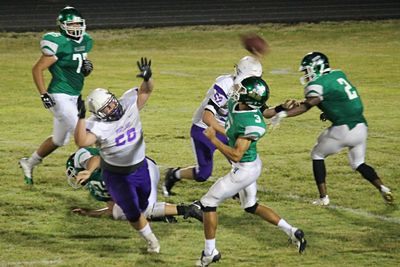 Never was the old adage, “It’s not how you start, it’s how you finish” more apropos than last Friday night as Hillwood stumbled in home-loss to Portland, 31-20.

The Hilltoppers offense started the game with a 44-yard pass from quarterback Hale Page to tight end Miller Baker. Two plays later Page found a slanting Baker over the middle for a 14-yard touchdown reception, as Hillwood reached paydirt in just 46 seconds.

The Toppers defense would force three-and-out but the snap sailed over the head of Panthers punter Isaiah Mason and was recovered by Mason at the 2-yard line. The Toppers were penalized for a late hit moving the ball to the 12-yard, where two plays later Page again found Baker, who made an acrobatic, juggling catch for a 12-yard TD. Page then found Baker in the end zone for the two-point conversion. Just three minutes and 11 seconds into the first quarter, Hillwood was on top 14-0.

The start, though, wouldn’t translate into the finish, as Portland used a ball-control ground game and Hillwood dropped four passes, including a would-be touchdown, and a touchdown pass nullified by a holding penalty late in the game. As a result the Panthers would outscore Hillwood 31-6 the remainder of the game.

“Our passing game has been really clicking in the first two games,” said Hillwood coach Kurt Page. “I expected us to be able to move the ball with our senior leadership, but we have to eliminate the mistakes with the dropped passes and penalties.”

The vertical game continued to prosper as Hale Page passed for 294 yards and a pair of touchdowns and also scored on a 1-yard run. The senior has 589 passing yards and five TDs in the first two games this season.

The Hillwood ground game, which churned out 150 yards in the season-opener against Columbia, was limited to just 45 yards by a stingy Panthers defense. Senior Jordan Owens led the Toppers in rushing with 22 yards on 10 carries. Fellow senior Avery Bass, who rushed for 80 yards against the Lions, managed just seven yards.

“As a pair, they are the most physical runners we have encountered in my four years at Hillwood,” said Page. “They were always falling forward and moving the chains, keeping our offense off the field.”

Hillwood travels to Hunters Lane on Thursday night in the Class 5A, Region 6 opener. It’s the first audition in the Toppers quest for a fourth-straight state playoff appearance. “We place a major importance on our region games. It’s our goal to make it to the TSSAA state playoffs and a win at Hunters Lane gets us one step closer,” Page said. Kickoff is set for 7:00 p.m.