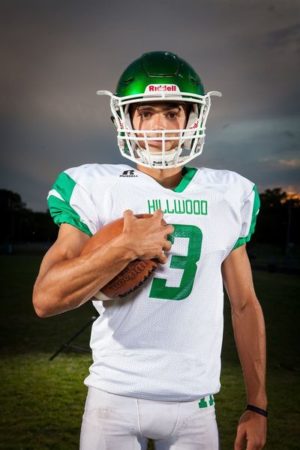 On a night where Mother Nature delayed kickoff an hour and a half, Hillwood used a big-play offense and stifling defense to smother Hunters Lane, 47-0. The Hilltoppers offense registered 18 plays over 10 yards while the defense never allowed the Warriors in the red zone and recorded 19 tackles for loss and four sacks.

“When you have a weather delay, you hope your team can maintain its focus, come out and execute and be on point,” said Hillwood coach Kurt Page. “Quite frankly, we started better than I expected.”

The Hilltoppers reached the end zone twice in the opening 8:30 of the first quarter as quarterback Hale Page scored on an 11-yard run, followed by a 60-yard strike to senior wide receiver Kyle Carder. Leading 12-0 after a pair of failed two-point conversions, Hillwood scored again just 31 seconds into the second quarter when running back Jordan Owens plunged into the end zone from eight yards. A Page two-point conversion run put the Toppers ahead, 20-0. Owens would find paydirt again from a yard away with just 1:16 remaining in the half and a Page pass to Carder added the two-point conversion to increase the lead to 28-0 at the half.

The focus continued in the second half as running back Avery Bass scored on an 8-yard TD run just 57 seconds into the third quarter. Page tossed a pair of touchdown passes to senior tight end Miller Baker and sophomore wideout Avion Brown of 11 and 48 yards, respectively to round out the scoring for the game.

“Our offense really took advantage of the short-field that the defense provided and we were able to strike quick with some big plays,” said Page, who is in his fourth year as coach of the Hilltoppers.

Page delivered touchdown passes of 60, 48 and 11 yards on his way to passing for 230 yards and four total TDs. On the season, the senior has passed for 819 yards, 8 TDs and just three interceptions.

Baker posted over 90-yards receiving for the second straight game with four receptions for 98 yards and a touchdown. Carder added a 16-yard reception to his total good for a pair of catches for 76 yards and a TD. Sophomore Avion Brown’s lone catch of the night was a 48-yard touchdown reception, his first of the season.

A trio of senior rushers totaled 189 yards in route to a season-high 244 yards on the ground.

Nick Spivey led the Toppers with 70 yards on just seven carriers, followed by Avery Bass with five carries for 62 yards and a TD. Owens rounded out the total with seven rushes for 57 yards.

The offense eclipsed the 400-yard mark in total offense for the second time in three games with a season-high 474 yards. On the season Hillwood is averaging 36 points and 418 yards per game.

Although the offense has been explosive this season, Hillwood’s defense hasn’t been as consistent as the Hillwood coach would like.

“Our players are still learning the 3-4 defense, but we are making strides,” Page said. “I was very pleased with the shutout effort. We just need to keep improving each game.”