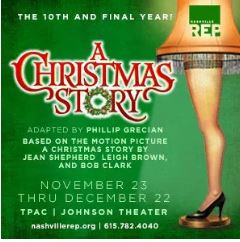 Adult Ralph Parker is remembering back to a Christmas season when he was nine years old living with his parents and his younger brother Randy.

He was known as Ralphie, and like most kids, loved Christmas, his favorite time of the year. He often fantasized about things that he knows as an adult would never happen,  but within a child’s mind, his thoughts are entirely plausible. Ralphie wanted an official Red Ryder carbine action 200-shot range model air rifle, aka a BB gun, more than anything for Christmas.  As it looked increasingly like he was not going to get this prized gift, Ralphie went about trying to manipulate and outwit those he thought would either be the decision makers or influencers of that gift, namely his parents, his teacher, Miss Shields, and the big guy at the North Pole, even if he was in the form of a less than empathetic department store version.

Between his younger brother Randy and having to handle the school bully, Ralphie doesn’t know how he’ll ever survive long enough to get the BB gun for Christmas.

There’s still time to see this hilarious show at TPAC! Adapted for the stage by Joseph Robinette, the funny and witty songs are provided by the songwriting duo of Benj Pasek and Justin Paul, whose compositions figured prominently on the NBC show, Smash. Sure to appeal to the entire family, this musical is a whimsical, nostalgic portrait of 1940s America and a stone-cold holiday classic.

The 10th and final year for The Christmas Story runs through December 22, 2018 in Andrew Jackson Hall at TPAC, with tickets beginning at $45.00.