Whether it’s fighting a house fire or buying or selling a home, Jad Dotson is always on call.

Despite his quiet, unassuming demeanor, Jad is one of the more visible guys around Bellevue.

That can happen when your career follows a dual path as an agent with a high profile real estate firm and as a first responder for the local fire station.

It’s not the notoriety that has led him down this road; it’s the opportunity to pursue two interests that he’s passionate about.

“They are different but in each one I get to do something I really enjoy: helping people and serving people,” he says. “I grew up around the fire department and I’ve always enjoyed housing and construction.”

Dotson’s late father, Rip Dotson, was a firefighter for the Nashville Fire Department (NFD). Initially he didn’t think about following in his father’s footsteps. But when Jad was about to graduate from Lipscomb University in 2010, he felt the calling to return to the source of so many great childhood memories.

“I was in college, graduating, and kept thinking about [the fire department], says Dotson. “I missed the family aspect, the camaraderie, and it was appealing to me to do something that has been a part of my family.”

So with his newly earned bachelor’s degree in business administration firmly in hand, Dotson applied for a position with the NFD in 2010. He took the written and physical exam, and waited.

“It’s very competitive and it took a couple of years to get hired,” he says.

But the call from NFD came in 2012. Dotson spent six months training at the academy before becoming a full-fledged firefighter. He’s been with the department, working a 24-hour shift every third day for more than six years and he’s been at Station 37 in Bellevue since 2015. 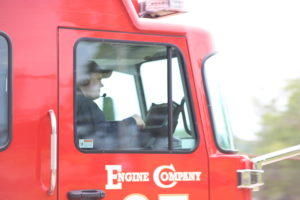 As a firefighter, Dotson has seen his share of action including raging fires and traumatic car wrecks. There are calls he remembers vividly but he’s fortunate that they are not upsetting to the point of keeping him awake at night.

“We show up on a person’s worst day so it’s important that we assess their situation thoroughly and professionally,” says Dotson. “We talk about ‘situational awareness.’ That’s what we’re trained to do. We have to help people, but we have to be safe. If the first responder puts himself in danger by taking unnecessary risks, he may not be able to come to the aid of the person who’s in distress.

“You still get that adrenaline rush but we do it so often that most of the time you keep your cool.”

Sometimes the most rewarding calls are those that, technically speaking, are not terribly difficult. Like the time an elderly man called in distress because his wife had fallen and he was unable to help her off the floor.

“We really didn’t do anything big,” says Dotson. “She fell and was uninjured but he could not lift her.

Not long after that call, the elderly man’s wife passed away. He dropped by the station and delivered apple pies to the firefighters, just to say ‘thank you’ for helping when he and his wife were in need.

“It was a minor incident but it was a big deal to him,” says Dotson. “And it meant so much to know that we made a difference, that we were able to provide relief and comfort at a time they needed it most.”

Dotson is able to blend his dual career because his NFD shifts are so concentrated, and real estate is so flexible. He’s in his third year with Bellevue-based Poplar Hill Realty.

“Real estate is a good career to have alongside firefighting,” says Dotson. “And when it comes to helping people, there are similarities between the two.

“Don’t misunderstand. Helping someone find or sell a house is different than helping someone in the midst of an emergency. But the stress and anxiety that comes from buying or selling a home is real. They rely on you to help them understand the process and to navigate it successfully.”

As one of the more visible faces around town, Dotson enjoys meeting and working with so many others who make their home in Bellevue. And don’t be surprised, if you ever happen to have one of those days, if he arrives on the scene when you need him most.